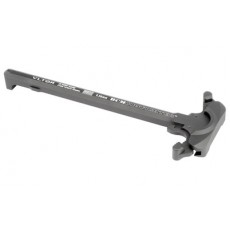 When the AR15 system was first introduced to and fielded by the US Military in the 1960s, the manual of arms for an infantryman was significantly different than what currently exists today. To charge the rifle the shooter released their hand from a firing grip, grabbed each side of the charging handle with the thumb and forefinger or the first two fingers , (while applying pressure to the latch) pulled the charging handle all the way to the rear, and then released it to charge the weapon.

Like everything else in the last 45 years, tactics and weaponry have undergone a continuous evolution. Red dot optics get the shooter on target quicker, shorter barrels allow the operator to more quickly negotiate tighter urban areas, and operator’s manipulations of the weapon system have become much more efficient and faster. The current manual of arms has the operator maintaining a firing grip almost continuously while manipulating the weapon with the non-dominant hand in an effort to more quickly get the weapon ready to fire. With that premise, most weapon manipulations are done only with the shooter’s support hand; to include operating the charging handle.
In order to perform an immediate action or charge the carbine, current CQB techniques have the operator racking the charging handle to the rear using their support side hand only. This is done in one swift and strong movement. With the operator’s firing grip maintained, the weapon again has a loaded chamber, and the shooter can immediately bring a hot weapon back into the fight.

The current use of extended tactical latches has made this movement much more efficient. The only drawback to this type of manipulation is all the force used to rack the charging handle rearward goes into the extended tactical latch and is then transferred into the roll pin. With this scenario, the entire operation becomes contingent on the sheer strength of this tiny 1/16” roll pin, and its’ ability to take continuing blows. Repeated and forceful support hand only racking of the charging handle eventually can lead to breaking the roll pin and losing the latch completely. With the latch blown out, the charging handle will not stay secured to the receiver as the bolt is moving back and forth during each cycle of the weapon’s action. Not a good situation on a two way range.

We have been very fortunate to receive continuing feedback from trainers and operators alike for several years now regarding these issues. Internally we have seen this many times while in the course of continually test firing weapons before sale. Initially we matched up a couple prototype solutions, but in conversations with Eric at VLTOR, he was able to develop a better design at a better price for the consumer. (VLTOR US Pat No. 8104393, 8336436, 8356537)
Introducing the BCMGUNFIGHTER™
(VLTOR US Pat No. 8104393, 8336436, 8356537)
The BCMGUNFIGHTER™ Charging Handle and extended latches feature internal redesigns to direct the force off of the roll pin and into the body of the charging handle during support hand only manipulations. This new design has a built in backstop engineered into the extended latch and into the charging handle. As the latch is opened up, its’ travel is limited by these flat surface backstops. With this travel limiting feature, the stress is taken off the roll pin, and is now redirected into the entire body of the charging handle.
The BCMGUNFIGHTER™ Charging Handle offers two significant advantages.
1. Since the tiny roll pin is no longer the weak point - it is a much stronger system and tactical latch will stay intact even under repeated support side only manipulation.
2. With the force kept inside the body of the handle, when the handle is pulled directly to the rear, it moves directly to the rear and does not angle off to the outboard side. A much smoother operation.

On the cutaway computer drawings you can see the inside machining of the latch. It shows the 3 inside contact surfaces. (The 2 semi circular cuts are to aid in the removal of dirt and debris that can get inside the handle.)

On the bottom view you can see the outside of the latch itself. It is actually as thick as the handle. This provides 2 additional contact surfaces to insure the force is maintained inside the handle and offers the operator more contact surface to manipulate the handle.